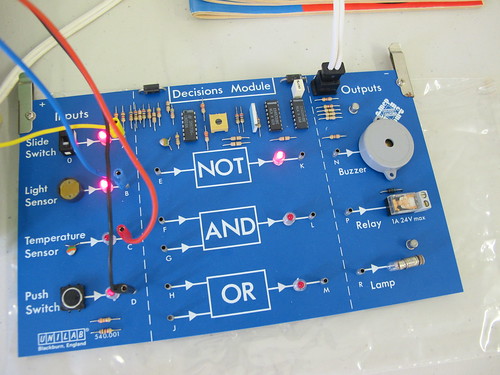 Never underestimate the power of friendship.

A couple of weeks ago a science technician at school was clearing out a store cupboard and came across two suitcases filled with blue Unilab circuit boards and some 6v batteries. Having no use for them he was about to chuck the lot until he wondered if the nerdy geek in the room downstairs might be interested.

Suffice to say, I’m chuffed to bits. Not only do I have 9 functioning logic boards and 10 binary counters, I have a load of worksheets as well.

I’m missing the BBCs and some big boxy units to get the computer and memory modules to be of any use but we can do some hands-on physical experimentation and there are even a set of 8 worksheets to try out different practical circuits to work on.

Combine this with Logic.ly to create virtual circuits and my Logic Circuits Challenge Cards and there’s a pretty good suite of resources I think.

If you don’t have any old, spare kit lying around then the logic circuits can be bought for around £10 a throw in eBay or you could create your own using a Raspberry Pi, Arduino or Shrimp. £10 is still a lot less than buying a new kit though, and a lot more straightforward to use I think.